with baldness problems. It is also seen as an interesting look that makes a man's face much more attractive.
Tricopigmentation, in the world of Scalp Micro Pigmentation, is the only technique able to achieve a perfect shaved effect and imperceptible to human sight in a natural and harmonious way with the connotations of the face.
Once shaved the hair at zero or 2/3 mm, it will be necessary to follow a simple but accurate protocol that will benefit from the optical effect of a dense shave that integrates perfectly with any real follicles if they are present.
Reproduces the maximum effect of follicular density in areas partially emptied by baldness or totally glabrous in cases of universal alopecia or areata, reduces transparency in subjects who have performed a transplant and did not get the desired hair thickening, conceals all the scars of the scalp after transplant, is perfect to permanently eliminate the use of the prosthesis, restores immediately shaved effect.
Those who commonly choose shaving, often do it for convenience or to minimize baldness too noticeable but, in recent years, the American trend has depopulated and won any prejudice about it, either for the models imposed by cinema (actors such as Bruce Willis or Matt Damon etc.), or for increasingly widespread and rooted male aesthetic needs. The success of the shaved effect tricopigmentation is probably due to the fact that, according to many women, the man with shaved hair is a symbol of "power" and "manhood", and allows, even to those who were subject to universal alopecie or aerated, therefore inhomogeneous, to acquire a decidedly more orderly and youthful appearance.
Tricopigmentation is the only one able to guarantee a real change by definitively improving, in just 2 sessions, its image. 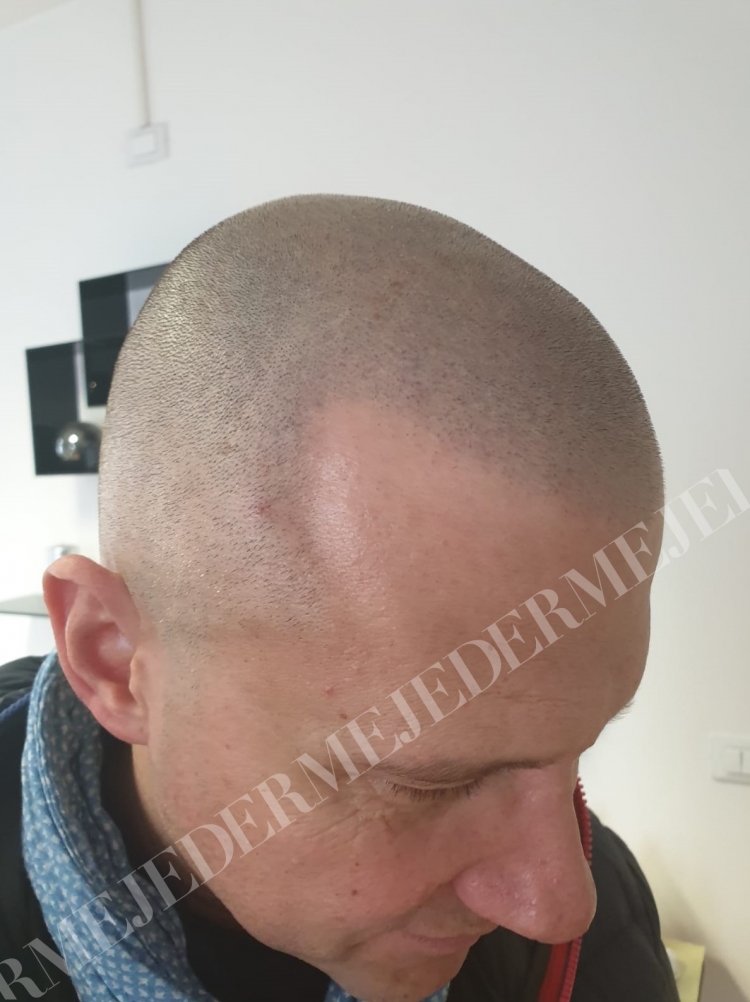 12 reasons why a shaved head is sexy... told by a woman

Posted on 10/10/2014 by Bernardo Pezzella in Curiosity
Our colleagues at AllWomentalk have produced an interesting article in which a woman tells the reasons why she considers bald men sexy. We decided to propose it again as he told it:
I'm married to a man who shaves his head intentionally because of a constant recession and a few too many gray hair. I always thought guys with shaved heads were pretty sexy. I am also pleased that nowadays more and more men are putting an end to the problem of baldness with this decision, rather than relying on more or less effective care, or worse. again with the use of the wig.

Here are 12 reasons why bald men are sexy. What do you think?

1. A SHAVED HEAD MAKES MEN MORE ORDERLY
Since the morning, when they wake up without having a deformed head from the pillow, shavers have the great advantage of appearing neat from the moment they open their eyes. This neat appearance will be present throughout the day whether it is a day dedicated to work, sports or leisure, there will never be a risk of sweaty hair sticking on the front.

2. BALD PEOPLE LOOK MORE MASCULINE
Pay attention to how many action movie actors are bald, they are really many and are definitely sexier than the ones with the pigtail. Bruce Willis, Vin Diesel, Jason Statham and Samuel L. Jackson are just a few of them. Moreover, I believe that their choice strengthens the image of the roles they play.

3. BALDNESS AND MATURITY SEEM TO BE INTERCONNECTED
When they find themselves having to explain why they shave, bald men have to constantly confront themselves and probably because of this, they become more mature. I still have to meet an immature man with a bald head, although I'm sure there are many of them, but as far as I'm concerned, baldness seems to go hand in hand with maturity.

4. THEY ARE LESS PRONE TO TAKING HOURS TO PREPARE
Bald men do not need to waste time dressing up for hours in the bathroom before they can leave the house, their preparatory procedure is much easier and faster. The ones I know seem to have their feet on the ground and are not interested in judgments. They tend to have the attitude of "Take or Leave".

5. LACK HAS OTHER FEATURES STAND OUT
Usually, from afar, the first thing I notice about a man is hair and if the man is bald, my attention goes to other features. The smile, the look, the way he walks, the face expressions, the mimic, and so on, all things that could have been overlooked.

6. NO FUNNY HAIRCUT
Let's be honest, some haircuts are horrible to say the least. I saw some of them so dramatic that they deserved to be shaved immediately. Bald people should not worry about appearing ridiculous in this regard. Whether with a freshly made shave or a light layer of hair, their look is always sexy.

7. MEN WITH SHAVED HEADS ARE MORE CONFIDENT
In my opinion, the safety of a man is a rather sexy feature. Appearance seems not important when a man is confident. He is recognized by the fact that he walks with his head held high and is always ready to give a smile. The charisma of this type of man is undeniable as well as the fact that most men in this category shave their heads.

8. MANY CELEBRITIES ARE BALD BY CHOICE
The fact that many characters of the show have chosen to assume this look, has made the shaved head a real "trend".

9. ACCEPT CHANGES
A man who can accept the fact of losing his hair without necessarily having to resort to a transplant, a drug cure or a toupee, is definitely a person to admire. Accept changes in one's own body, a very important feature because men who know how to adapt, are men who will accept the physical changes to which women will also go. relentlessly encounter.

10. THEY DON'T WASTE TIME GETTING DRESSED UP
I'm not going out with a man who spends more time in the mirror just to comb his hair. Bald men do not need these unnecessary waste of time, they are more "Male" and therefore, "Sexy". They also do not take up all that space in the bathroom with their products.

11. MORE TESTOSTERONE
Generally bald people have higher testosterone levels than those who own all hair, it is one of the causes of their baldness. This makes them more active and vital, always with the right mood.

12. THEY ARE LESS ATTRACTED TO MIRRORS
You know what made me imbue when I dated guys with the perfect hairstyles? The fact that they were constantly mirrored to check the condition of the hairstyle. This is one of the least sexy things there are. I'd rather have my man wear a hat to make his life easier. Bald men do not have such problems; they are always 100% without the need to mirror, and they know it.